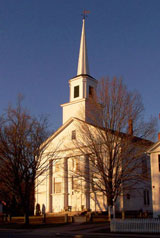 The history of the Union Congregational Church of Groton began in 1826, exactly 50 years after the United States declared its independence from Great Britain. Mr. John Todd was invited by The Rev. Daniel Chaplin, Pastor of the First Parish Church in Groton, to be his assistant. The Church voted on November 14, 1825 to call Mr. Todd. As was the custom, a Town Meeting was also convened to ratify the call to Mr. Todd. At this meeting, the vote was against calling him. A movement ensued in which followers of Mr. Todd separated themselves from the First Parish Church and formed a separate society. It was at this time that the First Parish Church became part of the Unitarian Movement and the Union Church of Christ of Groton was formed as a Congregational Church.

In 1826, subscriptions were drawn for a new meeting house, 512 shares sold at $10 each. On July 4, 1826, the cornerstone was laid. The Union Church of Christ in Groton was formally organized on November 21, 1826. The Meeting House was finished and dedicated on January 3, 1827 at which time John Todd was ordained as Pastor of the church. He served as Pastor from 1826 to 1832.

In order to make better use of the Vestry located beneath the Sanctuary, the entire church structure was raised several feet in 1887. The original architect’s drawing of how the church looked before this change in the building is also hung in the church.

The Union Church purchased the Adams estate across Main Street in 1874 which served as the Parsonage until its sale in 1997. On January 6, 1896, the Church and Society were incorporated as the Union Congregational Church of Groton, Massachusetts. The present organ was given and dedicated as the Andrew Robbins Memorial Organ in 1933. From 1943 until 1971, the Union Congregational Church was partnered with the Christian Union Church in West Groton. In 1966 the Church purchased the house across Willowdale Road for use as the Parish House. 2001 marked the 175th Anniversary of the UCC in Groton. We currently have about 250 members from a wide variety of church backgrounds and experiences who come together to worship God and to serve Christ and His people.